I heard this band on the radio tonight on two different stations. I remember dancing to this song at my first high school dance,which was held in the stifling, every surface layered with years of stagnant hormones, high school gym. It was 1982 and I was in ninth grade.

I wonder what songs my daughter will dance to this year and will they still be played on the radio in 20 years?

What songs do you remember from high school?

She spreads her legs for anybody, but Willow is just looking for a belly rub, at least that's what I think. She might also be a whore.

Either way, she's still the best dog ever!

In the past, I never understood why people made such a fuss over dogs. I always thought they were smelly and annoying and even though Willow is both, I get it now.

She's so loving and smart and will do anything for attention. She learns tricks/commands fairly easily with positive reinforcement and of course treats. This summer we decided to see if she could swim. Well, of course she can. And she loves it. The first few times someone had to push gently assist her into the pool, but now she jumps in and out all by herself. She even uses the ladder. Not once has she tried to get out without it. She swims around and around in circles and brings herself back to the ladder, only to push herself off again. She's like an Olympian dog. 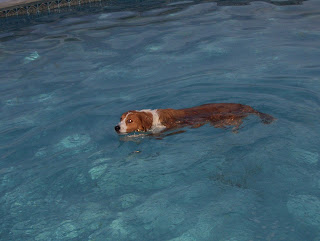 I was driving home from work one night around midnight and I was obsessing about-big surprise- my search for my birth parents. Specifically I was wondering if my mother was dead. I know, I'm morbid sometimes.

This song came on and I was singing along to it even though I don't remember ever hearing it before that night, and, well, a rabbit ran across the road in front of my car.

Really, as I was singing "like a rabbit in your headlights" a rabbit was in my headlights. I slammed on my brakes and thought, what the hell does that mean? There's a lot of rabbits in Vermont? Yes.(I've witnessed many suicides.) (Fortunately, that night I was able to stop in time.) Nothing? Probably. Or does it mean something more? When I was younger I definitely would have thought it was something more. But as I get older I get more skeptical about all "that"stuff.

So Why am I so Damn Short?

The social worker told me my file is the smallest she's ever seen. It contains mostly information on my adoptive parents, very little on my birth parents. Even less is the information she can legally give me.

So after 5 years of on and off active searching for my bio family, I finally have a small, very small bit of non-identifying information about my birth parents. In the letter from the social worker...

"Your birth mother was twenty-two years old. She stood five feet, six inches tall and weighed one hundred twenty-three pounds, with fair skin, brown hair and brown eyes. She was a college graduate who had majored in science. Your birth father was also twenty-two years old. He stood five feet, ten inches tall with a medium frame, and had light brown hair, brown eyes, and a medium complexion. He had graduated from college with a major in business administration."

Science? Really? I majored in art, psychology and then nursing and my hobbies are crafting and writing. Also, I always thought at least one of my parents would be short. Most likely I have a tall skinny sister. Bitch. (It doesn't say, but I bet her hair is straight too!)
There is some good news. The social worker told me that my birth mothers name is in my file. She said "you don't know how bad I wish I could tell it to you." At least now I know continuing to pursue the opening of my sealed record will lead me to a name.

What I plan on doing next is searching lists of college alumni with science majors in 1966-68. A needle in a haystack? Probably. But how many women could there have been in the 60's majoring in science? Also,there is a college near where I was born that has a big science school. Rennselaer Polytechnic Institute or RPI. I've tried to find lists online of alumni, but you have to be an alumnus of the school to search. I plan on calling the school to see if there are lists the public can view.

I'm also going to re-petition the court (first petition denied) for a different reason than the first and have my adoptive parents petition too. If these fail then I'm going to hire an attorney recommended by the Mass Department of Children and Families to help me.

Any suggestions? Anyone know an RPI alumnus?
Posted by Heidi at 2:36 PM 5 comments:

Every once in a while I read or hear something that's so romantic I wonder what it would be like if my husband spoke or sang words like that to me.


For example, what if Hus said this to me...
**"Sometimes I have the strangest feeling about you. Especially when you are near me as you are now. It feels as though I had a string tied here under my left rib where my heart is, tightly knotted to you in a similar fashion. And when you go to Ireland, with all that distance between us, I am afraid that this cord will be snapped, and I shall bleed inwardly."**Edward Rochester

Instead of this...
"Before you leave for New Jersey, don't forget to get that tick off Summer (cat)." Hus

Or this...
**"...My nightmares are usually about losing you...I'm okay once I realize you're here."**Peeta Mellark

Instead of this...
"I had nightmares last night, must have been the spicy chicken wings."Hus


Instead of this...
"Wow! We've been married how long? Man, that's a really long time." Hus


This...
**"When I asked my da how ye knew which was the right woman, he told me when the time came, I'd have no doubt. And I didn't. When I woke in the dark under that tree on the road to Leoch, with you sitting on my chest, cursing me for bleeding to death, I said to myself 'Jamie Fraser', for all ye canna see what she looks like, and for all she weighs as much as a good draft horse, this is the woman.'"***James Alexander Malcolm Mackenzie Fraser

Instead of...
"I was watching you from across the bar and my friend said "Dude, check her out, she's hot." So I ditched the girl I was with so I could be with you."Hus

Or...
"Want to go for a ride around the swamp in my truck like we used to when we first started dating?"Hus


Don't get me wrong, my Hus is very sweet and loving. He tells me he loves me everyday.  If he suddenly started speaking in romantic verse,  I'd think he lost his mind. (Or was trying to get me into bed.)(Heh heh)


Just one more from the oh so sweet Peeta...

"I just want to spend every possible minute of the rest of my life with you,"
Posted by Heidi at 1:55 PM 4 comments:

I Have a Little Story in Here

In My Thoughts Every Minute

I Heart Your Blog Award 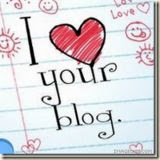 Thanks Merecat, Suzy and Joanna